From the same masterminds that brought us Soho House, the Electric Diner, and Pizza East (just to name a few), is a low-fuss rotisserie joint called Chicken Shop. I paid a visit to their Kentish Town location and had an awesome experience. The restaurant aims to serve consistent, high-quality organic chicken, and doesn’t disappoint. Nor do they fuss around with anything else. The menu is chicken and chicken only. You can get a quarter, whole or half bird, right off the rotisserie spit. Nicely seasoned and salted, it’s served with a few side sauces and a wedge of lemon. The only variety on the menu are a few tasty sides and of course a nice selection of beers.

My husband and I headed there on a weeknight, totally relaxed in jeans and sneaks, and bellied up to their oversized bar that doubled as a kitchen island. We had a front row seat of the open kitchen and were mesmerized by the cooks effortless flow of frying, salting, plating, and chopping. We had a couple beers, a whole chicken (which provided leftovers), a side of fries, and an order of corn on the cob. Everything was great. I did have a huge craving for a side of corn bread when I was there, but maybe that was just the American in me and the similarities between Chicken Shop and a U.S. BBQ joint. 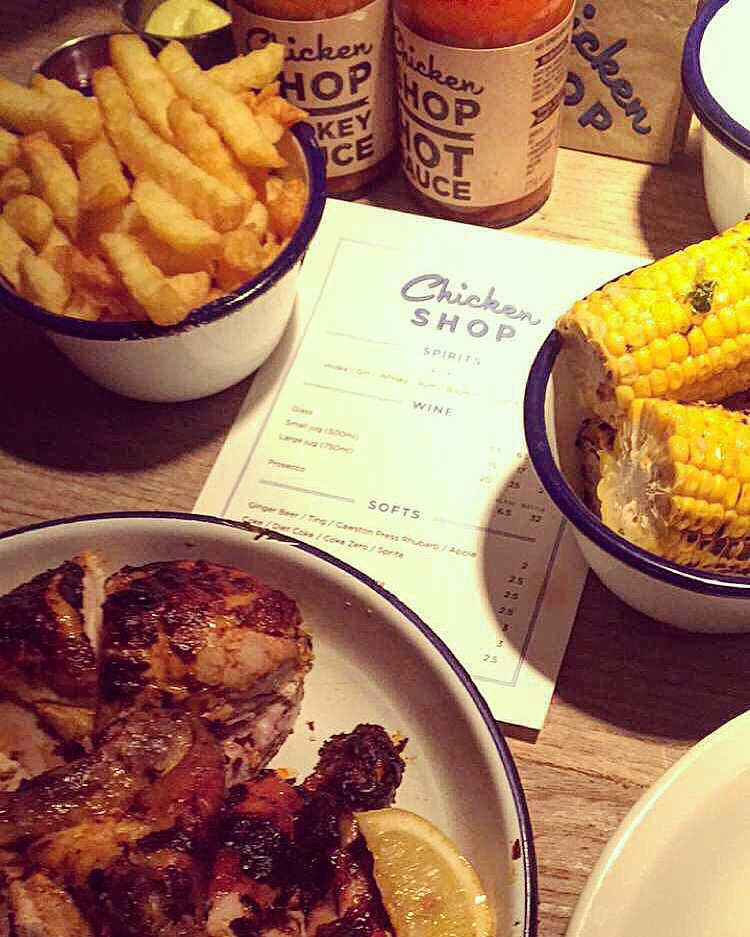 My corn bread craving was actually satisfied when we got to dessert. Their limited list of desserts offered one of the best apple pies I have ever had in my life. Although it was nothing similar to a traditional apple pie, I am still daydreaming about the dish. Your typical pie is to have a light, flaky, golden crust. This was more of an apple grunt (or a type of cobble) that was served deep dish, scooped tableside onto your plate, and had a cakey moist topping. This cake topping is what cured my corn bread needs and put the apple pie on my all-time favorite dessert list.

So, head to Chicken Shop for a chill night and delicious versions of basic staples. Beer, chicken, and pie. What more do we really need?